Self Healing Aspalt on the A58

On this Blog we will give info on the test track with Self Healing Asphalt that is built on the A58 near Vlissingen in The Netherlands. The Asphalt is a special type of ZOAB (very porous aphalt concrete) containing small steelwool fibres. A known but serious problem with ZOAB is ravelling: stones at the surface coming off in time due to microcracking in the binder. The special ZOAB that is developed at Delft University (sponsored by AgentschapNL) can be heated with induction energy due to the fibres that are present which closes the microcracks and with that extends the service life of the road.

After some years, asphalt binder is degraded by environmental factors, especially due to UV-radiation from the sun, until it loses the ability to bind the surface particles together (see Figure 1). This results in cracks which allow damaging moisture into the lower pavement levels, creating surface roughness, pot holes, degradation and eventual structural failure. At present, there are no solutions to close cracks in the pavement. Occasionally, when signs of ageing are visible, a sealant that protects asphalt surfaces from environmental degradation and moisture penetration is applied to the surface. Other times, asphalt rejuvenators, with the capability of changing the chemical composition of bitumen, are applied to the surface. All these procedures can increase the lifetime of asphalt for several years before rehabilitation or reconstruction is required, but they have the disadvantage that they only work in the first centimeters from the surface and can reduce sliding resistance.

It is generally known that asphalt roads can heal by themselves, but it is a slow process at ambient temperature, and it only works if there is no traffic circulation on the road. It is also well known that the amount of healing increases when the material is subjected to a higher temperature during the rest period. Therefore a project was started to investigated the increase of the self-healing rates of the road, which is as a good method to increase the lifetime of the pavement. As a simplification, bitumen could be considered as a very dense oil; when a crack appears in it, it will close by itself, but it will do much faster if the “liquid behavior” of bitumen is increased. That can be done by increasing its temperature locally. If the temperature of the asphalt is increased too much the asphalt will loose its porosity and with that its functionality.

The basis for the approach that is followed in this project is heating the asphalt with induction energy to increase its healing rate. The first prerequisite of induction heating is that the heated material must be conductive. In many previous studies it has been demonstrated how it is possible to make asphalt or concrete conductive by adding electrically conductive fillers and fibers. The second prerequisite is that these fillers and fibers are connected in closed-loop circuits. In Figure 2 a schematic representation is given of the system in which inductive energy is used for the healing of asphalt concrete. First a microcrack appears in the bitumen. If enough volume of conductive fibers or fillers is added they will form closed-loops circuits all around the microcrack. Then, if this magnetically susceptible and electrically conductive material is placed in the vicinity of a coil, eddy currents are induced in the closed-loops circuits, with the same frequency of the magnetic field. Heat is generated through the energy lost when eddy currents meet with the resistance of the material and, finally, bitumen is melted and the crack is closed. 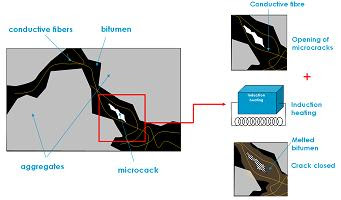 
Partners in the development

News items on our new asphalt